Not your usual combination, but it worked tonight.

Something happened tonight...
and when this happens, I usually end up being up to no good...
and tonight was no different.

Voo passed out on the couch. I made a mess.

Let me explain. Mr. Voodoo tries to keep the kitchen as clean as possible in hopes that I end up in there making a mess---I mean, making him dinner or baking up some treats. Well, this morning, I cleaned the kitchen and as much as I like to dwell in the abyss that is a clean house, I destroyed the cleanliness that was the cooking room. Now, because I absolutely melt when I see how excited he gets when he discovers what I've been up to, when I heard him a snorin', I knew what had to be done.

Out came the fuel. 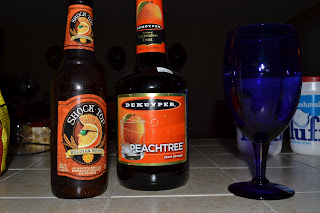 Yes, Schnocktop. It's delicious. Don't doubt me here folks, those that have tried it, agree.

I know I said muffins and beer. What I'm showing you is sausage. Now, since I understand a man has got to eat, I made him some dinner to go with dessert.

What say you? You see a muffin pan? Yes, why yes, you do. These little fellas came together nicely. And this is where I interject and say, I failed. I failed in taking photos of the beautiful process of putting together this batter and crumbly goodness for a topping. I'll not do it again, I promise! To make up for it, there are plenty of shots of the finished result to share!


This is what the kitchen ended up looking like. Really, not that bad of a mess in the end! 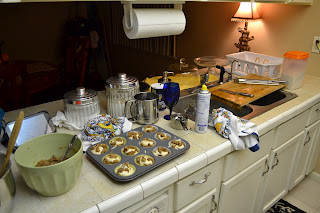 During the time that I threw together those little muffin men, I finished up dinner. In all honesty, I didn't put much focus in photographing this dish, but man, the end result makes me wonder, why not? It is really quite nice! I made a batch of white rice. Sauteed the peppers, onion, garlic and sausage. Added a handful of different spices including cilantro, turmeric, cumin, cayenne, salt, and I think sage found it's way in there. Added about two cups of cooked rice to the sauteed bits, and boy, it sure turned out yummy!


In the meantime, the girls helped me wake poppa up. Time for some puppy love and then dinner!

Well, let's just fast forward to dessert. Dinner was yummy, but these coffee cake muffins "took the cake", so to speak.

He looks cool and collected, unwrapping this bad boy, but let me tell you! These were HOT! Yea, they ended up that good. Steaming hot and being pulled from the pan. I seem to remember Voo saying, "...this poor bastard didn't even make it out of the pan!" So see, THIS is why I did all this. His excitement and love that pours out when he murders these steaming mounds of goodness is motivation enough. Don't judge me. We all have strange motivating factors. You can say that it's the Voodoo he does. ;) 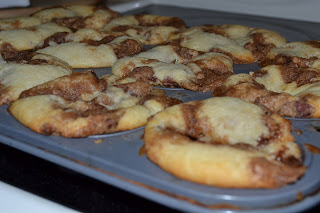 Seriously, look at that. Pure beauty, I think. It's all melty and wonderful in there. You'll see in a minute as you scroll further down how that "topping" actually sinks into the muffin. Lord, please save me, I'll die of eating too much pecan filling. 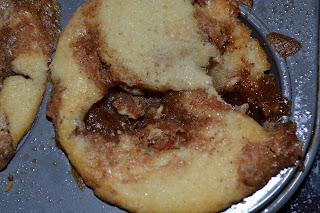 See that in there? That's the inside, filled with yummy goodness. Go on, lick that drool off your lip. I know I had to as I am typing this. Enough so that I'll go grab another... 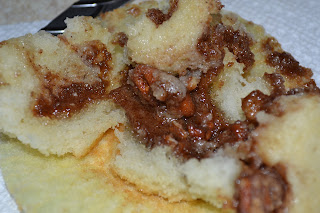 He was determined to get those little muffins out of there. He succeeded with a few, the rest were devoured.

A couple of the survivors. The one on the left is being eaten by me, right now. Buuurp. 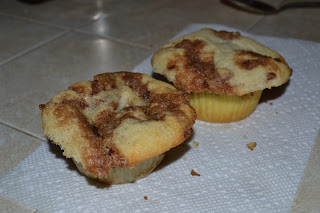 This recipe is unfortunately not my creation, although, the muffins are my variation. The original recipe came from The Pioneer woman. Thank you, lovely. Thank you for assisting in making our tummies oh, so happy.

Mission accomplished. He's full, and sleeping again. He gave me material to do an "update" as they're called apparently. There you go babe, another post. Thank you!